Darkstone: Evil Reigns is a little RPG from the late 90’s by French developer DSI, the same creators of Moto Racer and Another World.

A lot of people call it a “Diablo clone”, but even so, it was pretty good at that! This was a very enjoyable RPG to play back then and it had a lot of nice features that set it apart from other contemporary games of the same genre. I have fond memories about this game and was very happy to find it on GoG recently. It is definitely worth the playthrough. I’ve also just found out that there is a 2014 remake for iOS that looks amazing. Haven’t had the chance of playing it yet, but it sure looks neat! It is more than likely a full remake of the game, but the overall appearance look pretty much the same as the original, except for the UI, so I’m guessing they’ve reused most of the original art assets. The original release was PC/Windows only, Direct3D based. Later in 2001 a PlayStation port was also released.

Anyways, reverse engineering old games is kind of a background hobby for me. Sometimes the idea just pops into my mind and then I have to download the game again and fire up an Hexadecimal editor. But I also enjoy it because you can learn a lot about how games are structured. It serves as inspiration for your own games.

So last time I had one of those reverse engineering urges, I decided to focus on Darkstone and try to figure out as much as possible about it. The best place to start is with the game’s file formats.

If you download the GoG release of the game or open your old Darkstone CD, you’ll find some not-so-interesting stuff at first. Just the DirectX-6 redistributable stuff from MS, Heat.Net stuff for the online game and a few text files with keyboard bindings. Inside an mdata/ directory at the root you can find AVI videos with the intro screens and cutscenes. Those can be played on VLC or any other descent media player, pretty cool!

The rest is pretty much all binaries. Darkstone.exe is the game executable. No custom DLLs, it seems. The executable is big, by the way, about 1.3 Megabytes. It was a fairly complex game, so I assume the code base must have been large too.

Where are the game assets anyways? There are a couple files in the game’s tree with the .MTF extension. Those files are pretty big, the largest one with nearly 300 Megabytes. They seem like good candidates for the game archives storing smaller assets like textures, 3D models, sounds and such.

The Darkstone MTFs are a sort of package/archive file that contains a bunch of other smaller files, much like a common Zip archive would. Each MTF starts with a list of file entries and their offsets in the file. Pretty straightforward. After the headers, a list of the individual files follow until the end of the archive. Each file entry might be compressed using a custom RLE-like compression.

I wrote a more detailed description of the format here. Refer to the C source code of the extractor for the implementation details. I don’t think this MTF format is related to Microsoft’s Tape Format, but I have no idea what the acronym is supposed to mean.

The individual file entries in the MTF archive are compressed. The format uses a custom compression where identical chunks of data are only stored once. Each chunk of data is prefixed by a byte that indicates how the next eight bytes read are handled. I suggest looking at my decompressor implementation and the in-depth description of the format for the details. It is relevant to note that the description of the compression algorithm from Xentax Wiki is backwards. It says “If bit=0 then read 10 bits for X and 6 bits for Y”, but that didn’t add up, so I looked into this existing implementation and noticed that it was reading the bits the other way around (6 for X and 10 for Y). Trying that worked like a charm. I don’t know why it is the way it is in the Xentax entry. Maybe it is referring to a big endian architecture? Or was it just a mistake?

The first one is obviously the game’s background musics/soundtracks. Extracting it will output the 25 soundtracks of the game as MP2 files (that’s the predecessor format of the now commonly used MP3).

voices1.mtf contains, as expected, all the recorded in-game dialogs. This separate file probably made it easier to localize the game’s dialogs. That’s also the largest file. All extracted dialogs are in the MP2 format.

data.mtf is where the bulk of the game assets are. It stores all the textures, 3D models, sound effects, scripts and more. Once decompressed, this is the most interesting archive to look into. 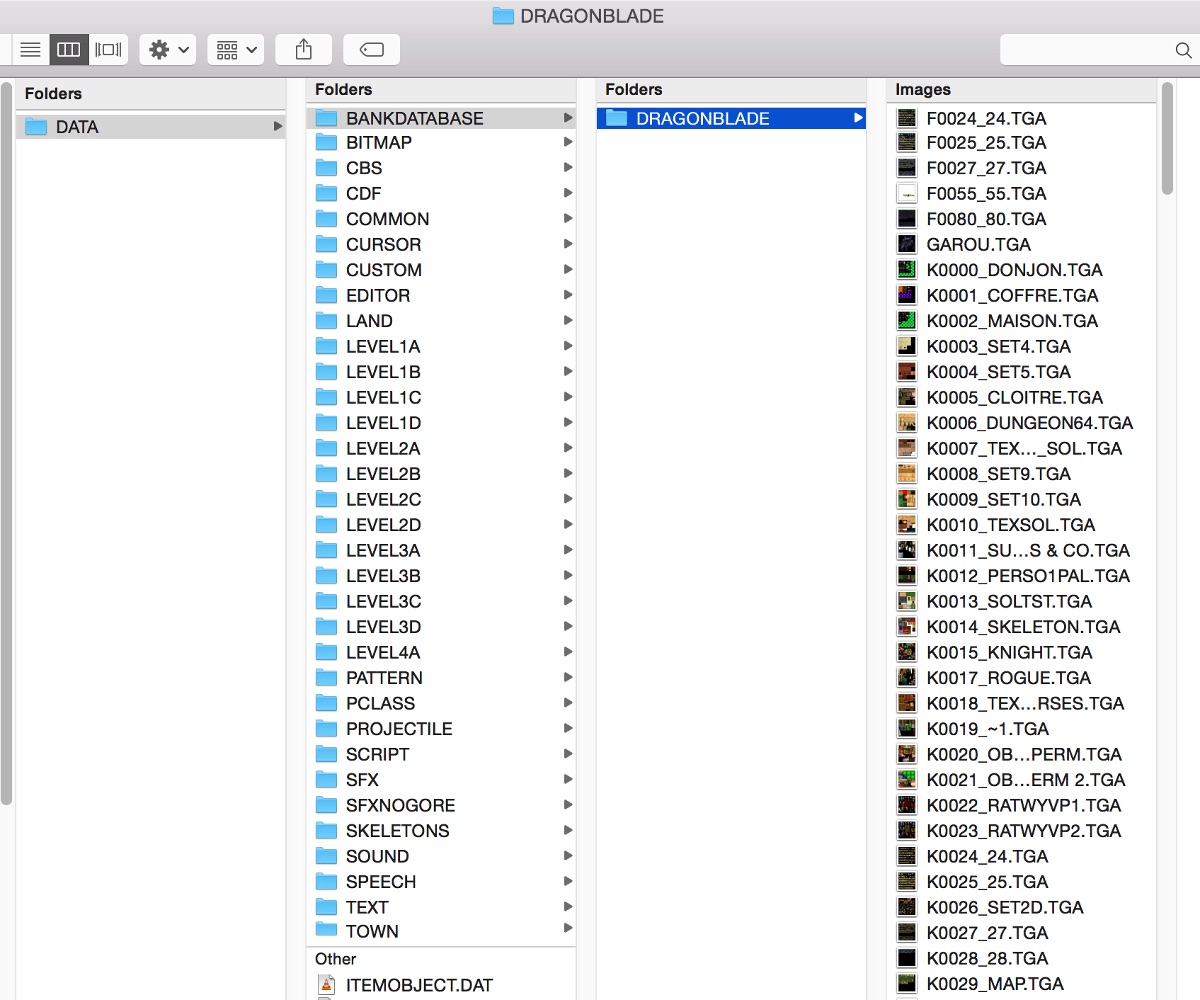 This is where things start to get more interesting. data.mtf, the main archive with the game’s art assets, is filled with files with the .O3D extension. Judging by the filenames, those clearly store geometry data for the game’s models. Some Googling didn’t turn up much about the file format, except that the 3D Object Converter tool can import them. I’ve tested it and it works, but the textures don’t seem to map properly to the objects.

At first I thought the format was related to the Objective3D Engine from now defunct Dream Overflow. The Engine is open source, so I took a look at the source code, and they do handle a custom 3D file format, but the structure appeared quite different from what I was seeing in the Darkstone files, so they are not related after all.

After a couple hours analyzing a few O3D samples in the Hexadecimal editor, I was able to figure out the format’s layout. It is very straightforward and easy to load. An O3D model consists of a tiny header, followed by a list of XYZ vertex positions (floats) and then a list of faces. Each face is a small struct with three or four indexes for the vertexes that make up a face (it can be a triangle or a quadrilateral) plus additional metadata like color, texture coordinates, material index and some other unknown flags. A detailed description of the format can be found here.

Having figured out the format, writing a simple viewer for O3D models was easy: 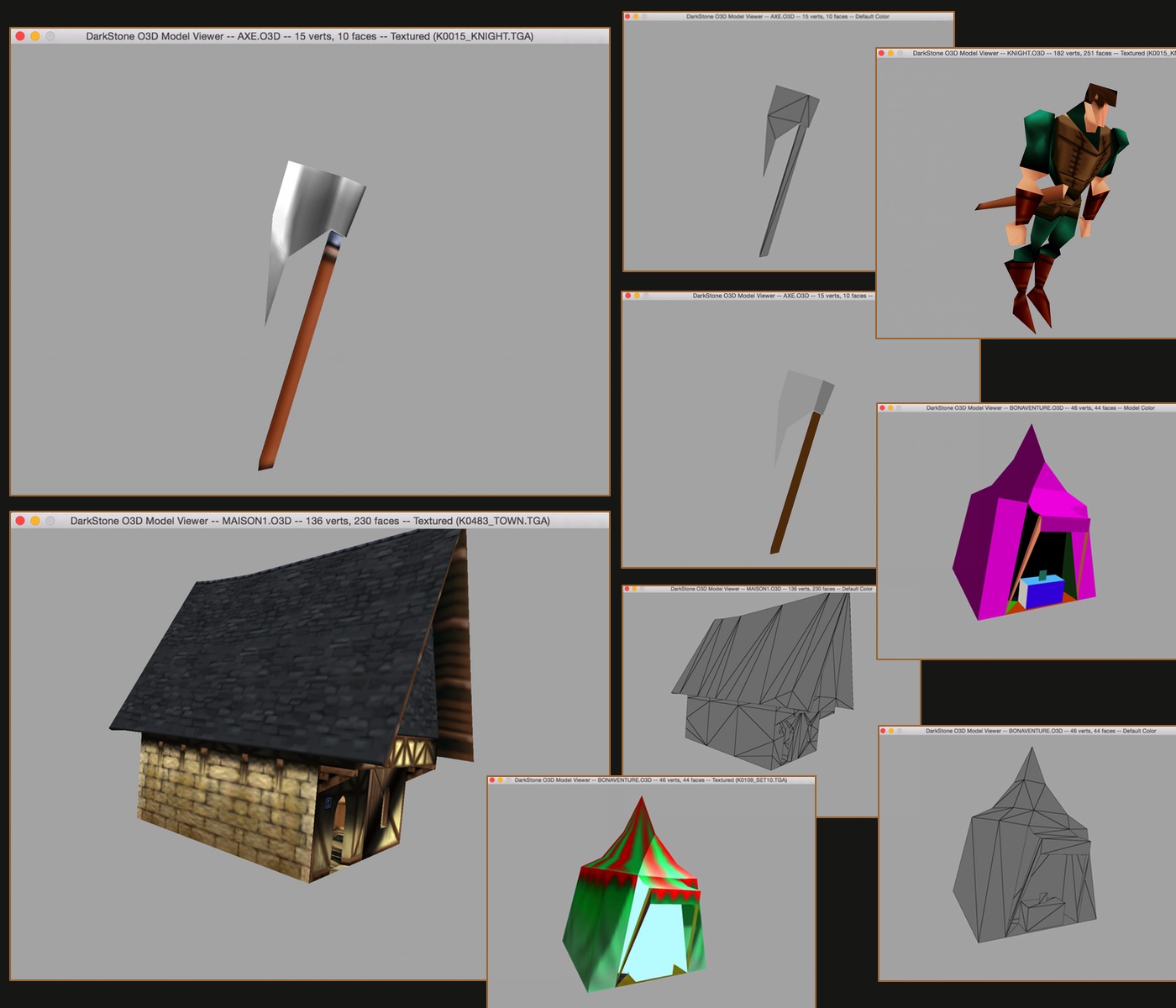 Source code for it can be found in the GitHub repo.

Sadly though, the O3D format is only used for static geometry, that includes: level geometry, weapons, items, the town buildings and so forth. The characters and monsters are all animated models, so they are stored in a different set of files, containing information for skeletal animation: 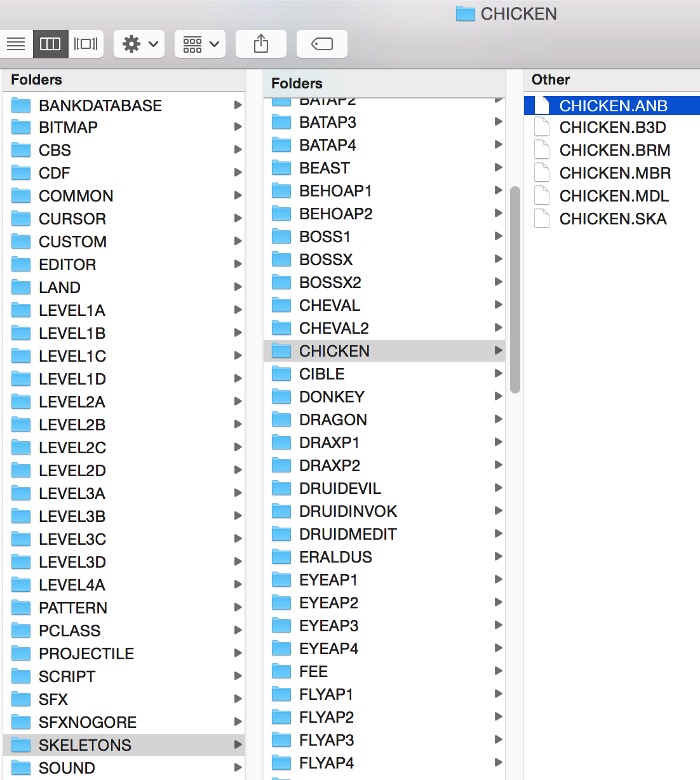 Those are all stored in the SKELETONS/ directory. All files are binaries, so figuring them all out would take a bit more time and effort, but it is feasible, no doubt.

Other file formats extracted from the MTF archives

data.mtf contains a lot of other interesting stuff. All the texture maps and sprites are stored as uncompressed TGAs. Most textures are shared by several objects, to optimize usage of the precious texture memory and reduce render state changes.

Since the terrain was composed of reusable tiles, we can find a lot of textures like this one:

Characters and player avatars were also packed in a single texture per class, like the Knight: 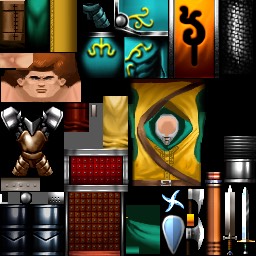 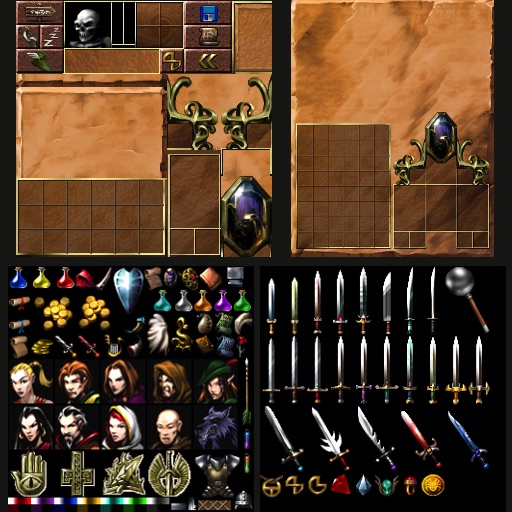 Text characters were also stored in texture atlases (there are also alternate ones for extended ASCII characters like accentuations, used for the non-English versions of the game). 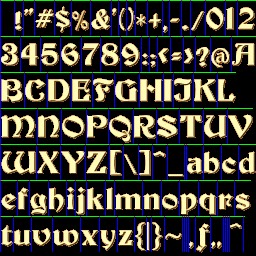 There’s also a number of other unknown binary files with the .CBS and .CDF extension. They seem to contain fixed size strings with a lot of zero padding. The strings seem to be mostly file paths. Probably used to specify the 3D models for the dungeons and monsters.

Lots of text files with miscellaneous configurations for player classes and monsters. These are probably pure gold for modders, since they can be easily edited.

Amazingly, some configurations are also in the MS Excel XLS format! Several damage tables and such. Most of these are inside the PCLASS/ directory.

There are many .WAV sound files with miscellaneous sounds and also files with the .SFX extension, which I assume stands for “sound effect”. These are all tiny so I doubt they store actual sound data, but more likely metadata about how to play the sounds, like volume, loop, panning, etc.

Some game logic in Darkstone is script driven. Well, more like data driven…

There’s a directory inside data.mtf named SCRIPTS/, which contains a bunch of text files with the .SPT extension. Those files contain some kind of description language for the possible game actions and dialogs. The structure resembles a bit the JSON format. For instance, an excerpt of QUESTFINAL.SPT:

It also supports minimal flow control via a GOTO property:

As mentioned previously, the sound effects are stored in WAV format with the additional SFX metadata files. The dialogs are stored in a separate MTF.

One interesting bit though is that there are two subdirectories in data.mtf, a SFX/ dir and a SFXNOGORE/ dir. I’m guessing the “NO GORE” ones are “softer” versions of the sound effects for more sensitive audiences.

The SPEECH/ directory inside data.mtf also has a bunch of peculiar files. Most are binary, but there’s one text file with the .BNF extension (DRAGONBLADE.BNF), with a structure that kind of resembles that of a BNF grammar.

Going through the decompressed data.mtf yielded a couple surprises…

The main directory where most of the texture maps are stored in named DRAGONBLADE. There are also other references in filenames and paths to that name. I wonder why? Was the game originally intended to be called Dragonblade? Or maybe that was the codename of the project during development?

By far the most WTF finding while going through the game’s textures was this: 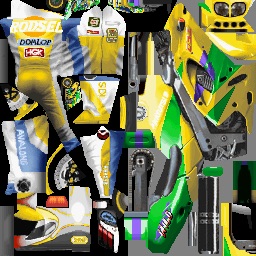 Humm, I’m fairly sure I’ve seen this somewhere else… 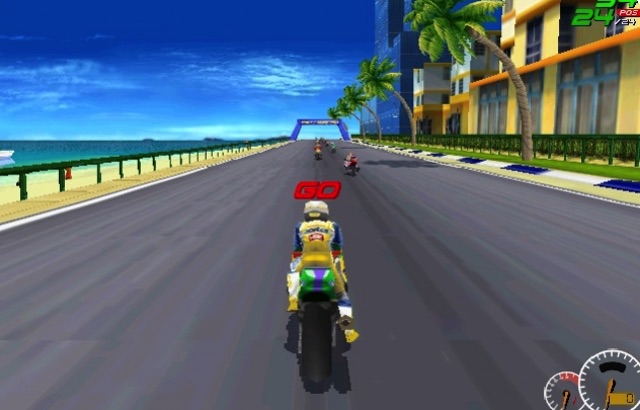 So, remember that in the beginning I said DSI, the developer behind Darkstone, is also responsible for the Moto Racer franchise? This raises a few questions… Does that mean that there is a Moto Racer Easter Egg somewhere in the game? I’ve never heard of any, but what other reason would there be for this texture map to be there?

It gets weirder still, there are also car textures in the middle of the other textures! 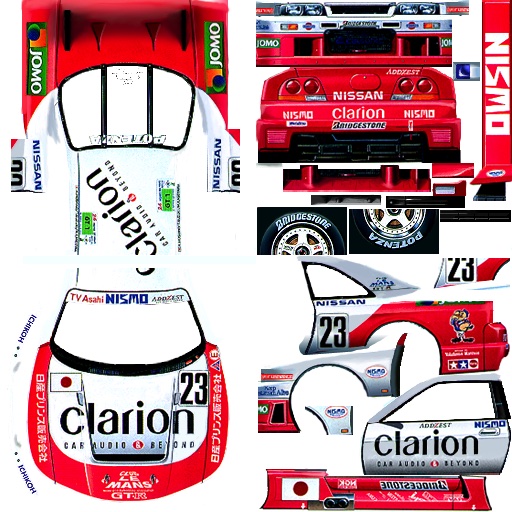 That was a surprising find! That’s the kind of stuff I’m looking for when I do this ;). I have searched the file list for all of the contents of data.mtf, but didn’t find any 3D model or similar with the words “MOTO”, “BIKE” or “CAR” in the name. In case you are really bugged by that and have some spare time, you can find a list with all the file paths and names in the three MTF archives of the original release in here.

Where to go from here?

Well, probably the next step would be reversing the animated mesh formats to be able to display the player-character/monster models in a custom viewer.

Another interesting take would be figuring out how to reassemble the dungeons and the town. Actually, in the TOWN/ directory from data.mtf there’s a text file named TOWN.TXT filled with a bunch of strings that seem like 3D coordinates. I’m guessing those are the absolute positions of the town buildings? So that’s an easy starting point…

Anyways, no promises, like I said in the beginning, these reversing engineering ideas come and go, so I’ll probably not pursue this specific game any further, I’ve satisfied my curiosity about Darkstone for now.

Ultimately, I write these posts to preserve the information and make it freely available, but also because I like to think I’m inspiring people to do the same. Maybe the next blog post I read about reverse engineering some old game is going to be written by you?… :)

Link to the GitHub repo.