In my last post I mentioned that I had decided to play with some PS2 homebrewing and try to get my own game to run on the Console. This post will be a quasi-tutorial on how to set up the development environment to start writing PS2 homebrew games.

Getting the tools: Compiler and companions

So the first thing to do is to get yourself a compiler capable of generating PS2 executables, plus all the other necessary tools. Fortunately, the very dedicated PS2 homebrewers have amassed all the necessary tools in a single package, the mythical PS2DEV SDK.

This SDK is not official, meaning it is not provided by Sony, but by very dedicated hackers that created all the necessary support software and libraries needed to make a PS2 game.

The PS2DEV SDK includes all the good stuff, such as:

Like I said before, this was all done by amateur developers, not by Sony. So these guys deserve some massive respect!

The PS2DEV SDK is not officially supported on Mac OS, but it is Linux-ready, so getting it to install on the Mac is not too hard. There are some gotchas though. I’ll provide a short walkthrough on the process so that anyone attempting to do the same won’t waste time figuring this stuff out and will have more time to program a game instead. These Mac workaround steps are probably not necessary for a Linux install.

First, download the ps2toolchain. This includes a set of build scripts that will download and install the rest of the SDK in a more automated manner.

While the download is running, you will also need to make sure wget is installed. ps2toolchain uses wget to fetch the rest of the SDK. It is much easier to just install wget instead of modifying the tool-chain scripts. Follow the previous link for a quick tutorial.

You should also make sure that gcc, clang, make, patch and svn are installed. These usually are if you use your Mac for development.

Once wget and friends are installed and the tool-chain is downloaded, you should start of by setting these environment variables:

They need to be persistent, so edit the ~/.profile startup script and add the lines above.

After, you need to create the directories referenced by those env vars. I didn’t want to risk changing the paths, in case someone has hardcoded a path somewhere else, so I just created a ps2dev folder inside /usr/local and also all the subdirs above. You need to create them by hand because the install script doesn’t seem to be able to mkdir inside /usr/local, even with sudo.

You also need to allow read/write/execute permission to the top-level dir. So chmod a+rwx on /ps2dev/.

Once that is done, you can try to navigate to the directory where the ps2toolchain was downloaded and run toolchain.sh: $ ./toolchain.sh

I got an error right away when it tried to build binutils. The binutils build script is set up for some older GCC version. I’m running Mac OS X Mavericks, which has completely replaced GCC with Clang. Clang is more strict than GCC and will fail the binutils compilation.

To fix this error, open the script ps2toolchain/scripts/001-binutils-2.14.sh and change this line:

The new flags will compile binutils in old-style ANSI-C mode, silencing the error.

Next up is building the custom GCC compiler. This bad boy will need two stages, one for the EE processor and one stage for the IOP co-processor. The firs problematic script will be ps2toolchain/scripts/002-gcc-3.2.2-stage1.sh.

Once the configure runs for this script, it will complain that the platform is not supported. And indeed this is true, since the script was made to run on Linux or Windows with Cygwin/MinGW.

And the script should now run fine. What we’ve done here was to explicitly set the current platform, by adding --build=i386-linux-gnu and --host=i386-linux-gnu. Note that we are lying to the script and saying that we are on a Linux/Gnu machine. This is fine for the purposes of compiling GCC, since Mac is, after all, Unix based.

That should get you through the first stage of the GCC build. The second stage is a little more involving. Once the toolchain.sh progresses and reaches the second stage build-script, ps2toolchain/scripts/004-gcc-3.2.2-stage2.sh, it should again fail due to invalid platform errors. That script has the same issue of the first one, so replace:

Now GCC-stage2 should compile but fail to link. This is a very shady bug. The linker will fail to find a function named libc_name_p. Doing a search in the GCC source code tree, I’ve found that the function is declared inside the file gcc-3.2.2/gcc/cp/cfns.h.

That file appears to have been automatically generated at some point by the gperf Gnu tool. The function in question is marked as inline. For some reason, this is confusing the linker. So what I did was to replace the inline with a static qualifier. But you have to copy the modified file to some other location, because the build script will download a fresh copy of the files every time it is run, overwriting any changes made.

So remove the __inline keywords and replace them with static, then copy the file to say ps2toolchain/patches/cfns.h and finally add the following cp command to 004-gcc-3.2.2-stage2.sh, just before where make is run:

This will copy the fixed cfns.h to the proper dir after the script refreshes the local copies, but before the build is run.

That should be the last modification you will have to do to the ps2toolchain. Once toolchain.sh finishes, it should have installed and copied all the needed stuff to /usr/local/ps2dev. Navigate to that dir and confirm it.

In the ps2sdk/samples/ folder, you should find several starter examples on how to use the PS2DEV SDK libraries. Navigate to ps2sdk/samples/draw/cube/ and run make. It should compile without errors or warnings, producing a cube.elf file in the same directory. This ELF is a PS2-ready executable. You can test it on an emulator, like PCSX2.

Installing PCSX2 to run the samples

Once the environment is set up and you have compiled the sample programs, you’re going to want to test them in a quick way, without having to copy them into the Console. Luckily for us, the PCSX2 project is well under way and fully functional, making for a perfect test bed for PS2 homebrew games.

This video-tutorial does a great job explaining how to install and run PCSX2 on the Mac. The links provided in the video description are most valuable.

After the emulator is installed and configured, I copied the cube.elf sample to the desktop and selected File -> Run Elf File -> No Disc in the PCSX2 menu and ran cube.elf. This was the result, very rewarding after the couple hours spent on the setup :). 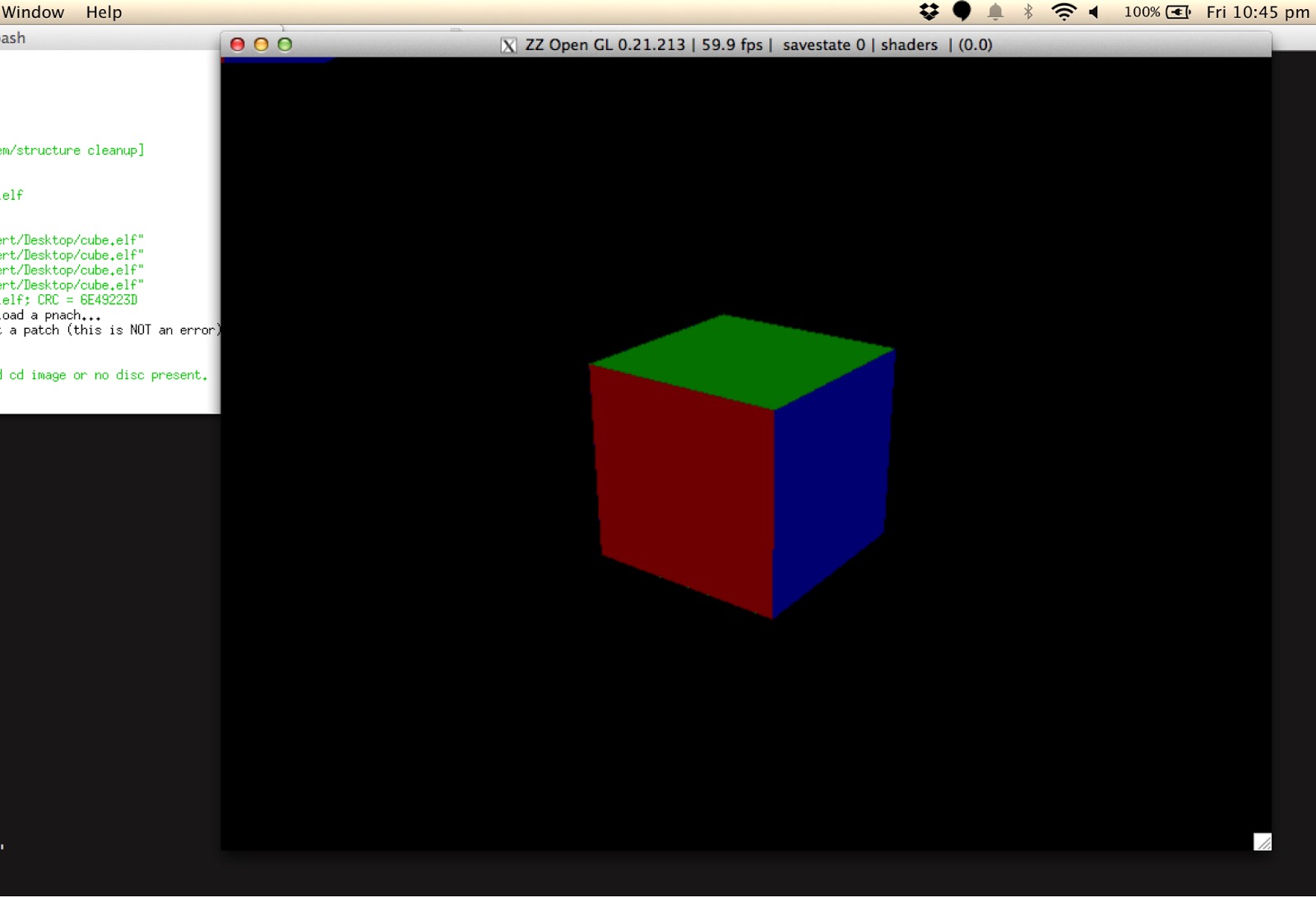 The cube demo from PS2DEV SDK running on the PCSX2 emulator.